This is my first in, I hope, a series of posts about the ‘state of things on the internet’ along with my findings and anything interesting I may have come across along the way.

This post will be about the state of Telnet (Port 23) on the internet from the perspective of a single internet-scanning host (read more in the methodologies section below). I’ll be going through some statistics including: top countries, top brands and/or firmware and lastly, an analysis on banner responses.

First let’s get some basics out the way so that it is clear how I got the results I did from my scans:

Lastly, I want to make two things clear about the #numbers in my results:

It’s common to see load balancers and security appliances reply back to a probe on Port 23 (or any other port really) which is probably one of the reasons why there are so many more open ports than banners received. The analysis below is based on the 2,570,080 hosts where banners were received from the scanned hosts.

The chart below is of the top 10 countries where banner headers were received – i.e., from a total of 2.5 million hosts.

The first few loosely follow the order of population by country so it’s no surprise to see China at #1. 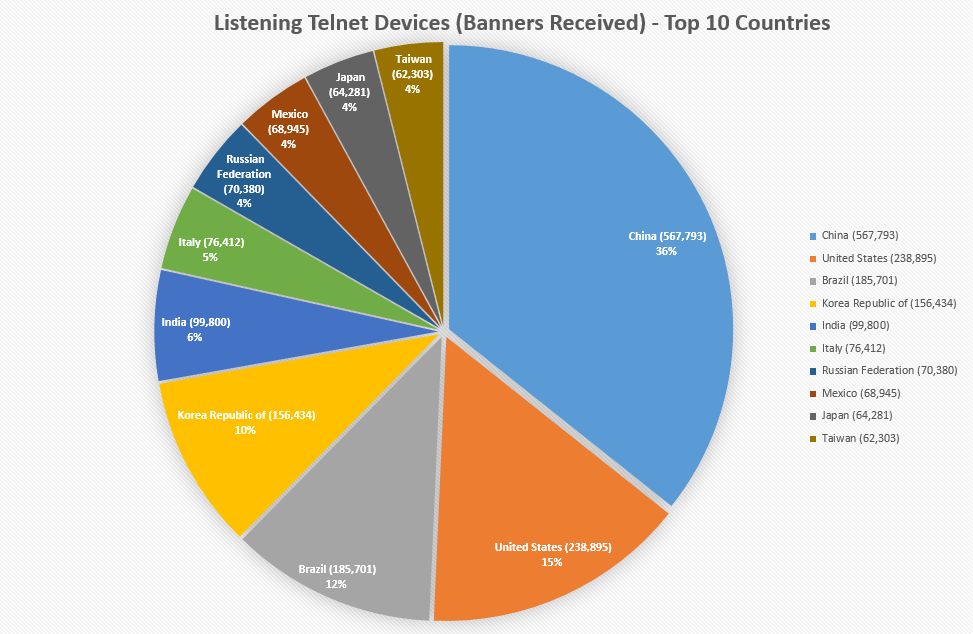 Analysing banner responses for long periods of time can make anyone go insane but it can also make one good at spotting patterns such as sentence structures which make it highly likely that multiple devices belong to the same manufacturer. 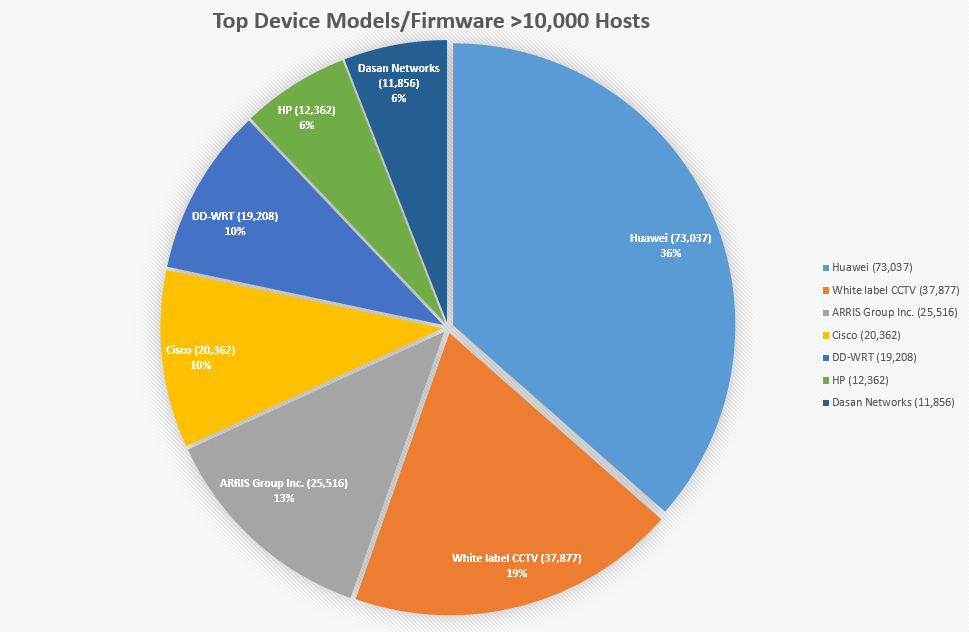 It’s no surprise to see Huawei devices pop up the most in my scans; they manufacturer networking and telecommunications equipment – apparently the largest in the world with regards to the latter.

The white label CCTV is an interesting one – it’s the only name I could come up with because as far as my research takes me, it seems like generic CCTV/IP camera/Digital Video Recorder firmware that has been re-purposed by X number of manufacturers.
The web page for this firmware looks like the below – you may have seen it before, I know I have. 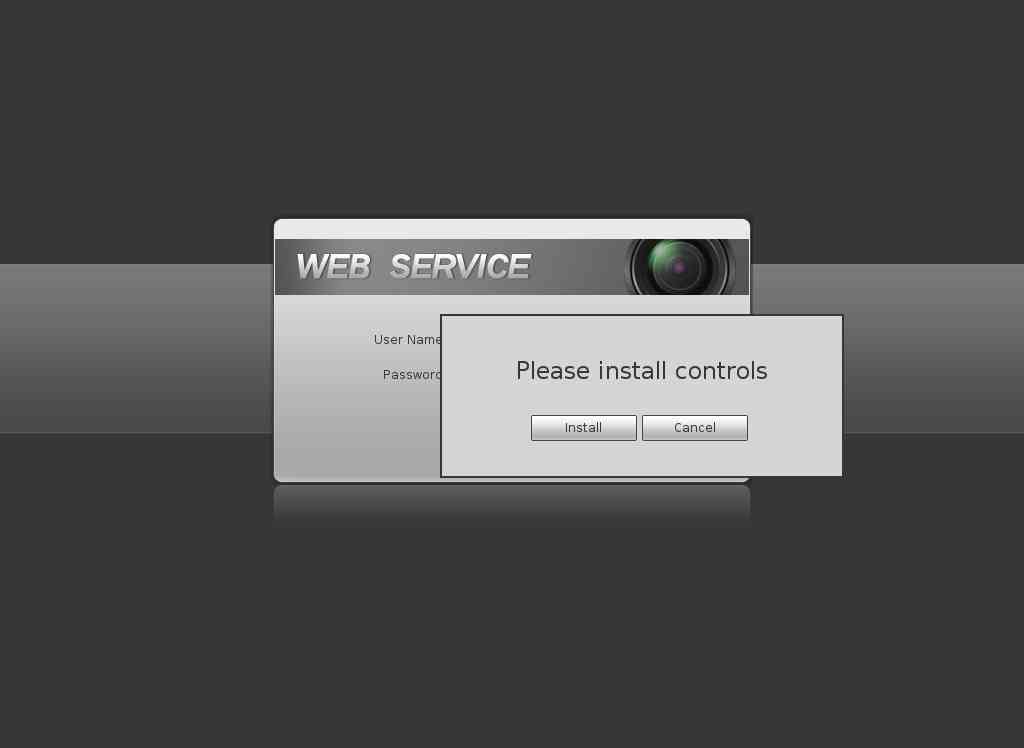 The banner for this firmware typically looks like this:

I was surprised to see so many DD-WRT firmware enabled routers with open Telnet access as this firmware is typically installed by tech enthusiasts and more advanced users who should probably know better than to enable Telnet on the external interface. DD-WRT helpfully gives us the firmware release and system name in the banner which can be useful for an attacker looking for interesting victims…

The ‘CIA’ seem to be running an older firmware release – anyone want to let them know? 😉

Some devices and firmware love to talk. I mean, take a look at this Polycom device – it’s happy to tell us its life story before we’ve even logged on.

A lot of devices and firmware grab the system name and/or locations and spit it out in the banner responses before log-on. Not inherently a bad thing (I mean security through obscurity is no security at all, right?) but it does make it easier for attackers to know who they’re attacking.

So this was an interesting one. There are botnets out there logging in to insecure devices with default usernames and passwords and changing them to something non-default in order to prevent them being attacked by malicious botnets.  There are a small number of these devices on the internet so far; 3,659 revealed in my scans.

This one seems to be created by Team White and the anti-botnet…botnet is called REINCARNA. You can read more about this on their GitLab page.

This one is a little less subtle but the outcome is the same:

It should be of no surprise that there are really old devices still sitting on the internet. This is a problem that won’t be going away any time soon but it’s still worth looking at some interesting stats…

As I was trawling through the data I came across some… funny banners.

Actually… I couldn’t really tell if this one was meant to be funny or not:

Have fun with my IP address, NASA.

Damnit why the hell am I seeing projectors on the internet?!

Telnet is not available on port 23 so why don’t you go ahead and look at this .gif (why is it even a .gif?!) which will tell you what port to connect to… my head hurt after seeing this one…

There was a small number of these Intelligent Power Meters – a mere clear-text password away from remotely turning off power?

Here’s an automatic number plate recognition system by PIPS Technology who have been exposed in the past.

There are GAMES running on Telnet!!! I guess I’m not old enough to have known that this was/still is a thing!

I certainly admire the effort.

And another – you gotta have some Telnet Chess competition, right?

I also happened to see a lot of non-telnet services responding on port 23. Most of them are probably the result of misconfigurations or an attempt at really bad obscurity.

It’s 2017 and we still have millions,maybe tens of millions of devices on the internet with default credentials listening on inherently insecure services. Millions of devices where credentials are being passed around in clear-text. Devices that probably have no reason to be on the internet at all like projectors and printers. It’s not a problem that will go away any time soon unfortunately and I don’t know that there is a clear solution for it either.

Network operators and administrators need to work harder to keep their infrastructures secure – there’s a lot of enterprise level equipment out there just waiting to be owned.

Is this all wishful thinking? I hope not…